a Movie that Looks Under the Rock of Motherhood 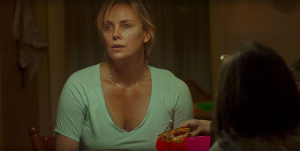 This commentary contains spoilers. Big ones. If you don’t like spoilers and haven’t seen the movie, stop reading.

A couple days ago I treated myself to an after-Mother’s-Day trip to see Tully, a movie about a mom adjusting to her new brood of three. I’d been looking forward to seeing it since the trailer was released — even after a review a few weeks back revealed some troubling spoilers. Few movies seem to really address motherhood, tending to focus on “supermoms” or “bad” moms, with little in between. Too often kids only appear when the plot calls for them; they are not omnipresent as our offspring typically are, particularly in the early years. The trailer was clear that Tully was not going to be one of those movies.

In the opening scenes of Tully, we are given an anti-hero of sorts. Marlo orders a decaf coffee even after a “helpful” older woman reminds her that the drink still has some caffeine, she seems nonplussed (at best) with late-stage pregnancy, her two children exhaust her wearing on what’s left of her patience, and while she clearly loves them, you see that this woman desperately needs a break – a break that isn’t on the near horizon considering the birth of baby #3 is days away.

Marlo’s initial unease with hiring a night nanny (which her brother suggests she should do and would pay for) results from her reluctance of having another woman bond with Mia. Caring for her infant, regardless of the toll it takes on her is her duty and responsibility – a belief many of us likely hold. This conveniently allows her husband Drew (played by Ron Livingston) to focus on his career, even though Marlo also has a full-time job in HR, and play hours of video games. Meanwhile, Charlize Theron’s portrayal of motherhood is unflinching (e.g., weight gain, eye bags, slouchy clothes and all). After a montage of midnight wakings, Marlo eventually, albeit reluctantly, raises the white flag and agrees to hire a night nanny.

If you haven’t seen the movie – there is a big twist and I’m about to reveal it. So exit now if you don’t want to know…

Almost immediately life takes a turn for the better. She has time to bake bread, prepare full dinners, make cupcakes for her son’s class, clean the house, all while being on leave from her job. Though fuzzy due to the plot twist, i.e., Tully is actually a figment of Marlo’s imagination and attributable to post-partum psychosis, we know in hindsight that Marlo was raising two kids with little help and adapting to life with a newborn with even less help. I chaffed at the idea that a night nanny would have time to do so many domestic tasks (which the movie insinuates before the truth is revealed) since newborn carework can and often is a full-time job, but we find out later that Marlo was actually doing all of it all herself. The result left her at the brink of acute exhaustion and psychosis according to her doctor. Still, as I saw the comradery of Marlo and Tully (which was seldom interrupted by a wailing infant), and Marlo’s blooming as a mother with her help, I couldn’t help but see the situation as idyllic.

It’s worthwhile then to examine how this movie challenges the impossibility of “good mothering.” It is remarkably easy to root for Marlo as life seemingly becomes more manageable after Tully joins them. (“Rah, rah, she’s having it all!” and “Viva, sisterhood!” are among the chants I could imagine shouting.) Still, Marlo’s ability to fulfill what everyone needs from her also inspires jealousy and self-criticism. (I haven’t handled being a mom of three that well. I don’t make home-baked treats for my kids, let alone bread. I’m sure you can imagine the rest of the list.)  Less easy to see is our own desire for her to meet our expectations of motherhood by coping easily with the long list of demands, particularly once she has a modicum of help.

The realization that Tully doesn’t exist quickly takes the utopian dreamscape that had been established to task. We realize that Marlo was being consumed to the point of having nothing left, all while her husband was left unaware. A part of me was thinking, “well it was great while it lasted.” Really, though, our preoccupation with and demand for “supermoms” has been part and parcel of Western culture for too long and has been intensely complicated by most families’ need for a second income and women’s own interest in fulfilling career goals that exist outside of having kids.

Ultimately, I remain dissatisfied with the revelation that Marlo is suffering from postpartum psychosis largely because it insinuates that they more mundane struggles of motherhood are not enough to carry a movie and that women’s disenchantment with the rigor of carework is symptomatic of mental problems. I see living examples of Marlo’s boredom, exhaustion, anger, and frustration rather frequently it seems, sometimes even in the mirror. With writer Diablo Cody’s inclusion of a dramatic plot twist and reliance on severe mental health issues, we mothers that relate to Marlo are left feeling we are abnormal, even chastised.

Equally troubling are the few minutes that followed her diagnosis, which depicts a life that will supposedly be much improved since Drew will now do more than help his daughter with homework and play video games. Tully’s ending suggests that Drew can save Marlo by being a more stand-up guy, but chances are slim this will be a sufficient salve considering Marlo’s mental exhaustion and presumed upcoming termination of maternity leave.

Drew isn’t the villain here, though. Yes, he should do more; that goes without saying. But we also need to address the ways in which women are expected to bounce back with little to no help, continue our careers as if our bodies and souls haven’t been impacted by birth (or face drastic wage stagnation), and keep our smile fresh while we meet the ever-rising standards of motherhood. I wish Marlo had challenged the status quo more rigorously.

Marlo is depicted as a free-spirited English major who slept around and partied with enthusiasm. Still, during one of the many conversations between her and Tully, Marlo essentially tells her younger self: “If I had had big dreams, at least I could be mad at the world, but I didn’t and now I’m just mad at myself.” (I’m paraphrasing.) Tully later tries to show Marlo that she has achieved the dream she actually set out to achieve: stability for herself and her children. Her achievement of the “American Dream,” is not problematic in and of itself, but I disagree that Marlo should internalize her sense of failure when it is clear that doing anything more than what she is doing without more help would be nearly impossible.

Interestingly, when Marlo is singing karaoke at a party her brother and husband grin in a way that suggests Marlo finally has her spark back suggesting she’s once again the non-conforming woman they knew and loved. In essence, though, that means that Marlo should be responsible for taking care of her kids, helping her two kids and husband adapt to life with a newborn while on a presumably short maternity leave, manage her son’s expulsion from kindergarten due to undiagnosed quirkiness, enjoy helping her daughter sing modern pop songs while sporting face paint, and do it all while pretending she doesn’t have a care in the world and doesn’t need help from anyone.

In this sense, the plot twist that has gotten so much press was uncalled for and actually detracts from the most radical aspects of the film. With that said, Tully remains a courageous movie to produce. Diablo Cody is bold in painting a bleak picture of what “having it all” looks like and we should respond by having serious conversations about what it means to live within an economy and family structure in which two incomes barely permit families to stay afloat.

Many moms are exhausted, have moments in which they regret starting or adding to their brood, and feel overwhelmed and anxious regardless of class or race — even as these markers may change a woman’s experience as a mother in significant ways. Tully calls on us to question how much women take on, even while it challenges notions of class, both in the sense that Marlo’s brother is significantly wealthier (and therefore has access to loads of help) and by showing how financially strapped many modern families are despite being a dual-income family. It is easy for most viewers to imagine that if this is what the “lucky” ones look like, then those further down the chain face more daunting challenges. This last point has received a fair amount of press, with the movie being panned for once again highlighting “white woman problems” that are insubstantial to the struggles many minority women face on a daily basis.

The core of Tully challenges viewers to question the institution of motherhood and to encourage us to see that we are not admitting defeat by needing help. Indeed, not doing so might be worse since families need to be better supported. As I have advocated in the past, if we continue to endorse an economic system in which two incomes are required then we need to proactively secure better support options for ourselves as mothers and for our families.

“The core of Tully challenges viewers to question the institution of motherhood and to encourage us to see that we are not admitting defeat by needing help.”