Do Our Children Belong at Our Work?

What if “bring your son/daughter to work day” happened more often? Don’t panic; it’s not as bad as it might seem! In fact, I took my daughter to last week’s Motherhood Initiative for Research and Community Involvement (MIRCI) conference in Florence, Italy and have survived to tell the tale. I learned firsthand that kids and work are not as diametrically opposed as we often believe and having them there can actually be fun for parents and young ones. That’s because last week’s conference was filled with brilliant, fierce motherhood scholars giving thought-provoking and interesting presentations, and it was also well-attended by kids.

I brought my daughter this year not knowing that so many other kids would attend and while there were a few moments in which she was bored, she also met a new “best friend” from Australia, had dinner with girls from Florida and Massachusetts, and said she would love to go to the next conference. Many of us moms talked about how great it was that our daughters (yes, they were all girls) were getting the experience to meet peers from around the world and see what it is that we do. In other words, women’s work as academics and feminists was being normalized right in front of them.

I was particularly moved by Jamie Day, who discussed classes she leads through her start-up organization Divine Mommy. Throughout her presentation Jamie’s daughter was literally underfoot, playing in her skirt, and sometimes holding her mother’s hand. Her husband was in the back of the room, filling the role of cheering squad, and could have retrieved the girl, but it was clear that Jamie didn’t mind. No one viewing her talk did either. Sadly, this is a fairly radical act. 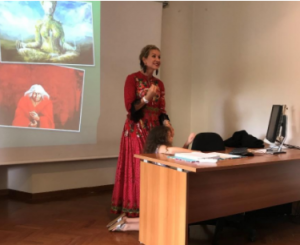 Jamie Day of Divine mommy speaking at the 2018 MIRCI Conference

Contrast this with the shell-shocked look of the BBC interviewee and the harried mom who rushed to corral their kids. It is fair to say that academic conferences, particularly one that focuses on matricentric feminism are different than other places of work, but the question remains: Why are we so steadfast in our belief that children do not belong at work?

For the most part it is because work is still a male domain. Of course women work in every field imaginable, sometimes even comprising the majority of the staff, but the contemporary institution of work remains one that is built on a model of male employment, particularly with a female spouse who can stay at home with the kids.

It has only been since the advent of capitalism and the industrialization that this divide has existed as we know it. Going back to the early 1900s and before, the home was where nearly all work happened for men and women. Later, mothers brought young children to wharves, laundry shops, and more. Childcare was expensive and husbands were often working, at war, otherwise incapacitated, or simply unwilling to parent in the way that would be required by young children. Childcare was only offered when the need for female workers was dire. I am certainly not advocating for having kids at unsafe work sites, rather for us to consider how the public worker was not so delineated from the private family person before and can be again.

Today, even schools remain unwelcoming to teachers’ own children, with upper-level ed being the guiltiest. Some schools offer on-site childcare for students with children, but teachers are typically excluded from this service. Moreover, when I pictured bringing my child(ren) to a more mainstream conference such as the MLA (Modern Language Association), ASA (American Sociological Association), or NCTE (National Council of Teachers of English), I was sure the response would be quite different than at MIRCI. Childcare is increasingly offered at conferences, but this only reaffirms the notion that children should be in their own space while we remain in ours.

Even more interesting is that I’ve been to a handful of MIRCI conferences in the past, and this was the first year that so many children accompanied their mothers. I believe that this reflects a shift in consciousness, need, and self-acceptance. In the past, children would sometimes attend their own mother’s talk, but even that was relatively rare. This year there were nearly a dozen kids, two of whom were still babies and got to nurse as needed while fellow attendees went about their own business or offering to help if it seemed warranted. I recognize that at certain ages, particularly about 8 months to 4 years old, little ones can be terrifically distracting, and most work environments are not set up with their safety in mind, but I recommend we work to change this.

One of the most pressing issues employers need to address is that workers are family members too. Still, the onus is not solely on those establishing corporate policy, since many workers would likely look askance if a fellow employee brought his/her child to work other than on designated days. Moreover, I’m guessing most parents wouldn’t WANT to bring their kids with them (based on many humorous comments I’ve seen after “bring your son/daughter to work” days), but this is likely because it takes so much work to make sure that their offspring adheres to grown-up rules, a situation that is designed to fail from the start.

It is only when we see the strength of merging our public and private selves that business and government will be pushed to respond, and safe places like the MIRCI conference prove that the radical reality isn’t as daunting as it might seem.

“I believe that this reflects a shift in consciousness, need, and self-acceptance.”