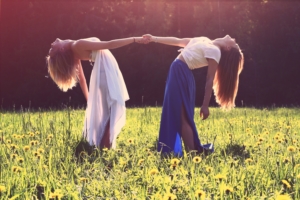 (Part 3 of 3) Last year I wrote an article for an academic journal that asserted that childcare can be an intersectional issue around which women from varied backgrounds could build alliances – including employers and employees. It was almost rejected because one reviewer adamantly disagreed that the premise of my argument was sound. I get it. Typical labor relationships certainly are not ones in which employers and employees unite, but it isn’t impossible either. Employees have been known to take pay cuts or freezes in order to help a cash-stricken company remain solvent or work together against an outside threat.

In this case, while mother-employers have the upper-hand socially and economically, all mothers are vulnerable when it comes to securing childcare, albeit financial resources can certainly provide a buffer. The employer also controls wages and often work conditions. The fact that her privileges, typically rooted in class, race, education level and immigration status, create imbalanced power dynamics, cannot be glossed over.  However, women who hire nannies or have their kids in childcare are very concerned about making sure that they do not abuse their power even if it is only because nannies have a profound trump card: They are often alone and unsupervised with the employer’s children, many of whom are pre-verbal. As a result, most women are very aware of their own vulnerability.

Recently, Leila Slimani’s highly acclaimed novel about a nanny who kills the two children in her care was released in the U.S. Like The Hand That Rocks the Cradle, Slimani exploits the profound fear that a caregiver will hurt the employer’s child(ren). Most women struggle at some level with the choice to outsource care, and nearly all cite trustworthiness as one of the most critical traits they look for, in part because employers are aware of their own powerlessness. What is interesting in Slimani’s novel, however, is how she handles the ebb and flow of power between the women, a depiction that is often understated and nuanced. Upwardly-mobile Myriam is a Franco-Moroccan who purposely chooses not to hire a woman of a similar cultural background; Louise is white, though struggling financially. Myriam has a law degree and ambition; Louise is presented as a bit dim academically and seems not to resist her own lack of agency. She doesn’t seem to love being a caregiver but doesn’t know what else she can do.

While one could argue that Slimani’s portrayal of Myriam borders on satiric, and often veers toward being unflattering, Myriam’s genuine gratitude for the work Louise does, even while she is blind to her privilege, allows readers to maintain a sense of identification and sympathy for her. There is a relatable humanity to Myriam and her struggle to “have it all” – a term I typically dislike when it comes to employed mothers but seems appropriate here. Securing paid work was optional for Myriam, though when one considers how unhappy she was with the monotony of caring for young children, the term “choice” begs a different framing. While Myriam’s husband Paul is initially reticent, pointing out that her salary will barely cover childcare, they are ultimately delighted by the freedom having paid help permits them. Their careers flourish, their relationship with one another is more vibrant, and their kids seem to love the attention, food, and – yes, even the power – that having a nanny affords them.

Louise has worked hard her whole life with little to show for it other than compounding debts from her late husband and a daughter who left home soon as she was able. Louise is alone and lonely, which may partly explain why she often takes on more than is expected of her. Readers are privy to the ways in which Louise laments the drudgery of daily caregiving, in ways that aren’t too different than what Myriam herself; however, with less education, a deceased spouse who left her a heap of debt, and few options, she relinquishes herself to another caregiving job.

Their relationship begins well. Myriam is thrilled by Louise’s patience, neat appearance, and above all else, her ability to accomplish what she couldn’t – namely having happy, well-fed children in a clean apartment at the end of the day. But gratitude only goes so far, and the most telling moments about the women’s relationship take place when Myriam is home but Louise hasn’t left. This liminality is challenging for many women.

Myriam, who is simultaneously guilty and unburdened by Louise’s homemaking capabilities, often tells Louise that she doesn’t have to keep doing a task once Myriam gets home, but Louise typically continues. It is hard to explain the etiquette of offering and re-offering help, just as it is difficult to explain how an employee knows when an offer to leave is only a veneer. However, with Myriam and Louise, the dance is one of power. Even when Myriam is clear that Louise should leave, Myriam stays, completing tasks and being “helpful,” which makes reprimanding her all the more difficult. In time, “Myriam lets herself be mothered” and “abandons more tasks to a grateful Louise” and describing her as the one who is “single-handedly holding up this fragile edifice.” She knows that she would be unable to have the career that she so enjoys without Louise; she also knows that Louise is doing a much better job than she ever did as a homemaker.

Later in the novel, when Louise takes a day off unannounced, Myriam panics, fearing that Louise would never return, a fate not totally unheard of with nannies and other domestic workers. When Louise explains she doesn’t feel well, Myriam reacts as a child learning her mother is ill; she is surprised that Louise isn’t invincible. When she hires an impromptu replacement for the day, she learns anew how insufficient other sitters can be, thereby increasing Myriam’s sense of vulnerability.  This vulnerability becomes more evident when Myriam resists calling out Louise for her idiosyncratic behavior. For instance, Myriam, who objects to Louise’s obsessive saving of food, including that which is expired, tries to forbid this, Louise expressly undermines her. Still unwilling to fire the woman, Paul teases, “You’re scared of being told off by Louise – admit it!” Myriam doesn’t deny it.

Many women who engaged in waged work feel like Myriam. I’ve interviewed almost one hundred women around the U.S., and those who have outsourced care are ubiquitously thankful for the women who help them. Many admire the work they do, finding themselves incompetent or marred by their own lack of fulfillment by caregiving. Like many women, Myriam refers to Louise as part of the family, putting her picture up in their living room, and doing everything to avoid conflict. Of course, this is a novel, and their utopian world must be challenged. In this case, as Myriam becomes increasingly aware of the ways in which Louise undermines her, she becomes defiant and distances herself from a woman who desperately needs to feel a part of something. With a novel opens with, “The baby is dead,” it is clear that any power Myriam had in the relationship has been completely shattered. While this may seem to be a salacious plot device, isn’t it what we all fear most when we bring a stranger into our home to watch our children?

On a much less drastic level, many women are candid in outlining that they handle their nannies with kid gloves (pun intended) for the very fact that they don’t want their poor choices or behavior to be taken out on their children. This isn’t necessarily showing the best of human nature, but it is an unassailable fact that can also be the basis for further alliance building. Women engaged in a childcare labor relationships are interdependent upon one another in profound ways and both are aware that the success of the other is closely intertwined with her own. Many domestic labor scholars do not believe that the mother-employer/nanny relationship can ever be one in which the mother-employer doesn’t hold nearly all the power as a result of her position as the employer as well as, in many cases, her race and class-based social advantages, but I disagree. I believe that the relationship of interdependence that forms between mother-employers and nannies is fodder for empathy, alliance building, and political change.

“I believe that the relationship of interdependence that forms between mother-employers and nannies is fodder for empathy, alliance building, and political change.”