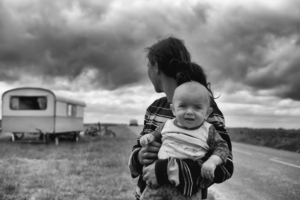 (Part 2 of 3) The mother/nanny relationship has long been mired in social inequality. Despite the mass exodus of African-American women throughout and after the civil rights movements of the 1960s and 70s, new minority women, often with tenuous immigration status, have taken their stead so other women, often of a more privileged class, race, and or education status, can obtain more desirable work.

In The Perfect Nanny, author Leila Slimani presents a nuanced, though simultaneously more disturbing analysis, of class than almost all nanny novels that precede it, including most notably The Nanny Diaries, in which the uber-rich Mrs. X is a lady who lunches with Manhattan’s elite and seems to view her son as an accessory rather than a person.

Unlike Mrs. X, Slimani’s Myriam Massé is a woman many readers will likely relate to. She was an ambitious student who put her work aside after having two children but finds motherhood stultifying. Myriam does not consider herself to be rich. Their apartment is the smallest in a building situated in a gentrifying area of Paris. She and her husband (Paul) see themselves as being “in the worse of all worlds: too rich to receive welfare and too poor to consider the cost of a nanny as anything other than a sacrifice.” Her new job as a lawyer will barely cover the nanny’s salary, but it is a trade she’s happy to take despite her husband’s lack of enthusiasm.

Slimani’s criticism of Paul and Myriam is often subtle. Like a painting by Seurat, it is easy to dismiss each point of indecency until the totality of their acts are viewed as a whole. It is fairly easy, for instance, to overlook the couple’s conversation that their ideal nanny should not be illegal or have children in France (where it is set) since both might cause them more headache, or Paul’s belief that his parents are selfish for going to Asia rather than helping them with childcare, or their possessive language when they claim ownership by saying “my nanny” instead of her name, Louise.

Any reader who has employed a tradesperson, cleaning person or local sitter can likely commiserate as the Massés congratulate themselves on their altruism as employers. Paul “checks his privilege” by questioning if they are taking advantage of Louise but applauds his wife for being “tactful” enough to hide purchases she has made for herself and the family from Louise. It is easy to swim in these warm waters with the Massés even while it is clear Myriam is really protecting herself from her own shame. Myriam’s gratitude for the freedom Louise permits her is frequent and genuine, so when she delights in inviting Louise to accompany them on their family vacation to Greece, saying, “Louise will be so happy. I mean, what else could she do that’d be better than that?” it is easy to give her the benefit of the doubt. As these moments of ignorance, egotism, and self-pitying accrue, Slimani challenges readers to question the benefits of their own class status.

Slimani is deft in these moments, and in the final example seamlessly segues into the first days of the vacation during which Louise is described as being unbearably hot and forced to share a room with the kids “to save money.” She can’t sleep despite walking in the “sweltering sun” with “whining” children all day. She seems to love Mila and Adam, but, as any parent knows, vacationing with kids requires a different definition of vacation.  Lest we think that the Massés are exceptionally obtuse, readers learn of a similar experience had by Louise and her daughter that resulted in the employers deciding traveling without her was a better option than having her witness their privilege or feel guilty for not wanting to share their comforts. Paul gleans a similar point when he discovers Louise never learned to swim and, even though he takes the time to teach her, blames her “for having brought her poverty” to Greece.

The Perfect Nanny offers readers a front-row seat to the nearly endless class-based affronts of domestic caregiving – whether it is, as in Louise’s case, an employer who promises a “real contract” if she gets an abortion, having to beg one of the Massés’ neighbors for more work so she can make ends meet, or being told by the principal of a school her employer finagled her daughter into that she might be more comfortable in a school in her own neighborhood. And, although Myriam claims Louise is “one of the family,” she and Paul know little about the financial pressure Louise is under until they receive a letter from the government regarding garnishing wages. When the couple confronts Louise, Paul states: “I’m well aware that this is humiliating for you, but it’s not very pleasant for us either, you know.” Another moment which, though it may ring true, startles in its ugliness.

Louise, it should be noted, is perpetually accommodating. She is emphatic (albeit coyly) that Myriam should take advantage of her help. It is easy to see how Myriam slides into complacency and trains herself to accept an increasing amount of help; Louise presents herself as the type of woman who thrives on helping others. Meanwhile, the Massés relish in their ability to pay for work that provides them such deep satisfaction — cared for kids, clean beds, the time required to help their careers thrive, delicious meals they share with friends, and more.

Slimani (via the narrator) is not clear in Louise’s intentions. Louise lives alone in a “soulless studio” in an unsavory part of town, far from the Massés, and her deceased husband left her with formidable debts. Still, she doesn’t seem to fear losing her job, nor does she idolize the Massés or seem covetous of their comforts. She would like to be more included, needed even, but simultaneously seeks escape from the burden of carework. Some of her actions and choices stand out with the foreknowledge that she will murder both children, but none are a stretch from the daily idiosyncrasies we typically encounter.

So, why, then are Paul and Myriam so harshly punished for what could be viewed as benign ignorance? Slimani claims the inspiration from the novel comes from her chagrin that a lawyer in the UK-based trial of a nanny who killed the two children in her care openly chastised the children’s mother for being remiss in her responsibilities. Still, this novel pushes on a similar vulnerable spot for many women.

Although Myriam is sympathetic (she nearly has to be with the loss of her children), Slimani is steadfast in her critique of what is a broken class-based system. This becomes most clear when Paul muses about the second-hand Rolex he purchased. “He really wanted it – he felt it was perfect – but he felt slightly ashamed of this fetishism, this frivolous desire.” He concludes, however, that “he had a right to treat himself” since he “hadn’t stolen it from anyone.” (With the U.S. title being The Perfect Nanny it is hard to block the echoes particularly with our cultural fetishism of domestic workers and accompanying ideas of physical ownership.) Paul didn’t literally steal the watch, but as we watch Louise’s stress increase, coming to full tilt when she witnesses a man publicly defecating in front of her apartment and fears she will be him in a short time, it is impossible not to put some of the onus for her economic demise on Paul and Myriam. U.S. culture values independence and it is anathema to claim Louise isn’t complicit in her own exploitation, however, with current neoliberal mores moving toward less employment regulation, Slimani’s novel brings essential questions to the fore.

Domestic work, including childcare, remains undesirable work in terms of prestige and income, yet many women with few choices enter the work in the hope to provide a better life for their children, send money to family back home, or simply afford their next meal. It is only logical that the homes they work in are more privileged economically. In The Perfect Nanny, Paul and Myriam are willfully ignorant of Louise’s difficulties. To acknowledge that their own success is built on her hardship would challenge whether the dream life they have erected is built from rotted wood. We all want to think that our successes are self-made, and to a degree, they are. Slimani is clear, though, that hard work is not the only factor.

Caring About Childcare During Covid

It Wasn’t the Woman Issue for Warren

“Domestic work, including childcare, remains undesirable work in terms of prestige and income, yet many women with few choices enter the work in the hope to provide a better life for their children, send money to family back home, or simply afford their next meal.”