I don’t write well when I’m angry, so I wasn’t going to write about DACA. I couldn’t not respond, though. Data regarding DACA is easy to find, but let me share some less-cited numbers before considering the fallout and rationale of changing DACA. 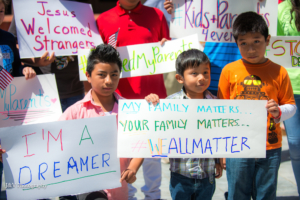 In other words, DACA is very much about families.

Seldom discussed is what forcible deportation means for remaining members of the family. Economically, remaining members may struggle financially, have schooling interrupted, and may lead to income being secured in less-than-ideal means. Psychologically, repealing DACA means removing the profound benefits for children who can go to sleep at night not worried about one or both of their parents being deported. These issues have a wide-reaching impact for us all as these young people are fellow students, teachers, nurses, and caregivers including nannies, elder care providers, and education support workers. (Click to see more.)

Ironically, non-citizens are permitted to join our Armed Forces and fight for our country with 8000 new recruits joining every year. The voting age was changed after the Vietnam War when Congress was convinced of the unfairness of conscripting men who could not vote. Now, however, our government seems fine with having male and female non-citizens defend our country even as we fail to defend them. All of this continues despite the numerous studies that show a net gain for the US economy by keeping DACA recipients here, where we need them and where they want to be.

Until now, DACA has garnered bi-partisan support, but moving forward this, too, will become partisan as GOP leaders encourage its ranks to fall in line.  However:

While Republicans are quick to cite family values they will be decimating nuclear families that are too often struggling financially and contributing in big ways and small to our economy. With nearly 70% of DACA recipients being female and 25% having at least one child, they are threatening mothers directly, a group they seem to hold in high esteem. ICE is known to give little information about where family members have been taken and/or are sent, increasing stress and discomfort for everyone. Meanwhile, 5100 children are in foster care due to a parent’s deportation (in this case not DACA specifically).

While Republicans are typically pro-life and claim that fetuses should not be punished for the mistakes of the parents, they will be failing to recognize the strong parallels between deporting children who were brought to the US, often at a very young age, by their parents.

While Republicans seem to court the Christian Right, overturning DACA means they will be closing the door to those that need help and will cast out the “strangers” we are instructed to welcome. Many religious leaders, including the Pope, have specifically spoken out about making immigration procedures more humane.

DACA is in place because up until now, representatives on both sides of the aisle saw the sense in keeping the people who, by nearly all measures, are among the best immigrants we have. DACA recipients pay taxes, go to school, follow the law. This White House, though, wants to take a hard stand on immigration so the President can appear tough and appeal to his base. President Trump is a “me first” type of guy, literally and figuratively (see G8 meeting), and in this case, “me first” means putting the US economy at risk by deporting people who contribute to its economic prosperity, who we have invested in via public education, who Americans want to welcome, and who will be costly to deport — all in order to keep his macho image in place. Officially, he is calling on Congress to present a better plan, but in reality, he is exerting the “rule of the father,” which is the literal meaning of patriarchy.

It is easy to rest on the numbers and ignore the ethics. Indeed, my argument above utilizes data, too. Ultimately, however, this is about doing what is right. Trump’s administration has seemed unconcerned about the optics of tearing apart (otherwise) law-abiding families and, as we learned during the campaign, Trump himself has little regard for women as human beings. Ending successful, bi-partisan immigration reform wherein nearly 70% of those impacted are women is just one more egregious example. Unlike in the past, however, this situation is also about the economic viability of individuals, the people with whom they live and work, and their families. You’d think this, at least, would convince him.

All data provided by www.unitedwedream.org