Republicans have largely framed the health care debate as one of big government interfering in the personal concerns of average citizens while squandering money we don’t have on badly run programming. It seems the ACA, however, is more popular than the GOP had anticipated and even many red-state Republican senators proved unwilling to tick off their constituents by voting out Obamacare.

Indeed, framing remains the critical issue for the ACA, one which the Democrats largely failed on, squeaking out a win only by the virtues of the (watered down) policy rather than on their ability to sell it to the American people. Many flaws remain; even Hillary Clinton admitted as much on the campaign trail.

To frame the conversation in a productive way requires that we ask whether care is a fundamental right that should be provided to every citizen. Providing care has long been under the domain of women (as mothers, daughters, nurses, teachers, mystics, and so on), and therefore, many feminist scholars, including Carol Gilligan, Nancy Folbre, and Arlie Hochschild, Joan Tronto, have argued that the issue of care is directly linked to the issue of justice, and posit that we all must be responsible to one another. This flies in the face of the increasing push toward neoliberalism and its resulting austerity measures. 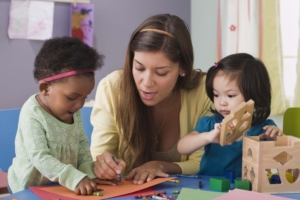 When this more holistic approach toward care is applied to the analysis of the ACA, we see that while the structure of the policy acknowledges the need for basic healthcare and even some preventative care, there is little offered in terms of what we often call the exalted type of care we know of – that of mothering.

Mothering, as I use it here, relates to the long-term, all-encompassing, loving maintenance that is offered to children so that they may flourish to the best of their capabilities and ultimately become strong, capable, contributing members of our communities and nation. While typically provided by mothers, others can and do mother as well (including nannies, grandparents, teachers, and so on). Clearly, care (and mothering) is required for strong physical and psychological health.

The last major push for comprehensive child care reform came close to passing under Nixon, but since that time little has really changed on this important front other than developing the largely successful Head Start program. With this movement stalled, it makes sense to look for a different way to breathe new life into it. The ACA may be the answer the way to reinvigorate this essential need under a different framing.

In effect, this means that we must admit that the carework done by parents, nannies, teachers and others is essential work that is required for a child to thrive. While we are comfortable acknowledging that health care is required either via maintenance or intervention so that a person can live a physically healthy life, we resist commodifying carework in a similar way and rarely pay a fair price for the work that is done. We must first align our dollars with our values by investing in the care children – particularly young ones – receive and be more forthright about the fact that children cannot thrive without adult interaction, guidance, and attention just as we need medicine and preventative care to be healthy.

Recent adoption of neoliberalist perspectives means that this will be a difficult fight. The easy stance here is to bring forward the numerous studies and predictive models that support the long-term gain made by investing in children at a young age. And, you may find these convincing. However, this is not the most robust, even if most quantifiable, answer.

At the heart of this (pun intended), is that when the ACA failed to be overturned, we made an important step toward acknowledging that care is a basic human right and by doing so it is impossible not to simultaneously admit that childcare should be part of this package.