There are few easy answers when it comes to the debate regarding unauthorized (or illegal) immigration. There are valid points to be made on both sides and as the daughter of an immigrant, my left-leaning mother is one of the first to say that if my father had to wait in line to get in then others should too.

Where the progressive left has often failed in its message though is framing the idea of immigration not as an issue solely for bleeding hearts who don’t want to see families torn apart, but as an economic issue that very much affects American families financially in unexpected ways.

Most economists agree that unauthorized immigrants are a net gain for our country.  The U.S. government could have tightened our borders decades ago, but it has chosen instead to keep control of the tap, so that the influx works to our advantage. While the most common examples provided in this sense concern agriculture, manufacturing, and the restaurant industry – the care industry is also rife with unauthorized workers and is listed as a top industry for immigrant workers.

It is difficult to get an accurate statistic of how many unauthorized women fill the ranks of child and elder care because much of the field is part of the informal economy – hired through craigslist or care.com sites with services paid in cash. But according to a 2015 study by the Pew Charitable Trusts, just under half (45%) of the workers in the “private household employment” sector (which includes nannies) are immigrants. Nearly half of those are considered undocumented. Currently, 12% of the total U.S. workforce are immigrants and 8 million of them are unauthorized. 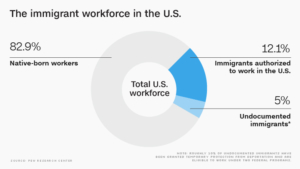 Typically, unauthorized women earn less and are open to much more extreme forms of exploitation, including unfairly low and/or garnished wages, sexual and physical abuse, not being entitled to fair working hours, and more. While some states, including California, Illinois, and New York have passed legislation to help minimize the exploitation of domestic workers (which includes care work), it is easy to understand that these protections too often remain elusive to those who are unauthorized to be in the U.S.

Meanwhile, hundreds of thousands of families rely on unauthorized women to provide the child and eldercare needed so that they can continue working, and ultimately contributing to our GDP via labor, production, and taxes. with many of those workers coming from Mexico, various Caribbean islands, or Eastern Europe.

Indeed, immigration patterns are shifting so that fewer women are trailing spouses, i.e., following their male partners here for work, as the demand for child and elder care far exceeds what the U.S. labor force can provide.  One reason for this is likely the low wages that child and elder care demands, particularly relative to the level of responsibility and degree of work required.

A large part of the answer is two-fold: 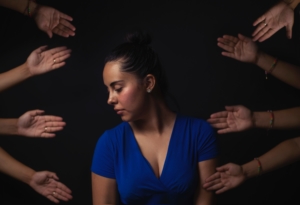 First, our government needs to be more forthright about the true financial gains we experience as a result of unauthorized workers in the U.S. rather than use immigration as a wedge issue to further divide the pool of voters, some of whom are uninformed about complexities of the immigration debate.

Second, women need to consider their own dependency on domestic work via cleaning help, childcare and eldercare and evaluate the ways in which they are contributing to trickle-down feminism.

It may be that the number of unauthorized and underemployed workers has encouraged (amongst other reasons) to remain a low-paid job, but when one looks at the history of carework, it is evident that it is not simply an issue of supply and demand. Instead, feminized work remains low-wage work in nearly all sectors of the job market.  As a result (and as will be discussed in a separate piece we need childcare to be a job that pays better with subsidized support from business interests and/or the government so that American families are not so heavily burdened with the cost of hiring the help needed so that they can work while simultaneously exploiting a workforce that deserves better.