Wonder Woman: Myth of the Village

Superheroes were often unhappy children before realizing their powers. Many are orphans who feel they do not belong and are social underdogs (see Batman, Superman, and Spider-Man to name just a few).

Wonder Woman is different. While Diana does not know her father, she seems very happy in her idyllic childhood. She is the only child in her community and is fortunate enough to have three very different caregivers, who, together, embody the perfect mother: the political queen, the warrior, and the comforter. 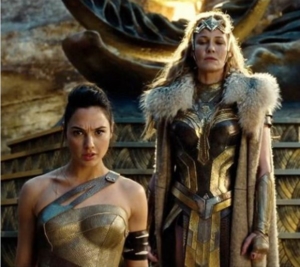 POLITICAL QUEEN: Hippolyta, the queen of Amazons and Diana’s biological mother, wants to protect Diana from harm (both from battle and from the truth of her father being a God). Diana also sees in her mother a ruler that has earned respect through wise and fair leadership.

WARRIOR: Antiope, a warrior and the queen’s sister, advises the queen that Diana will only be safe if she learns how to harness her power – both physical and emotional. Antiope defines courage and physical bravery for Diana.

COMFORTER: Diana also has a nanny, whose main job is to watch after her on a day-to-day basis. She isalso the one who loses track of Diana, though few people seem concerned since the entire village essentially watches out for her as the only young girl on the island.

Clearly few of us are parenting in a situation even close to what lucky Hippolyta had going for her. It may come as little surprise that mothers feel more isolated now than any other time in recent memory (due to the fragmentation of family groups resulting from job relocations, need for cheaper housing, etc.). Gone are the days of having grandma down the street, and a couple aunts a block over.

As a result, an increasing number of women are outsourcing care out of necessity and sometimes out of the desire for an extra set of hands. While this option is still too often chastised under the cloak of “mother is best” and other conservative rhetoric, many women already know that they can’t do or be everything for their kids.

The reasons for our ambivalence about outsourcing care are far-reaching, involving both historical connections to poor women who couldn’t afford to keep their children and had to get help from badly run organizations as well as deeply ingrained cultural messages that the care a mother provides her children is the gold standard.

Needless to say, I think nearly all women would be better mothers if they permitted themselves — and had the resources to — outsource care at least periodically. Not only is mothering emotionally (and at times physically) exhausting, but it helps children to learn from different caregivers.

“Gone are the days of having grandma down the street, and a couple aunts a block over.”